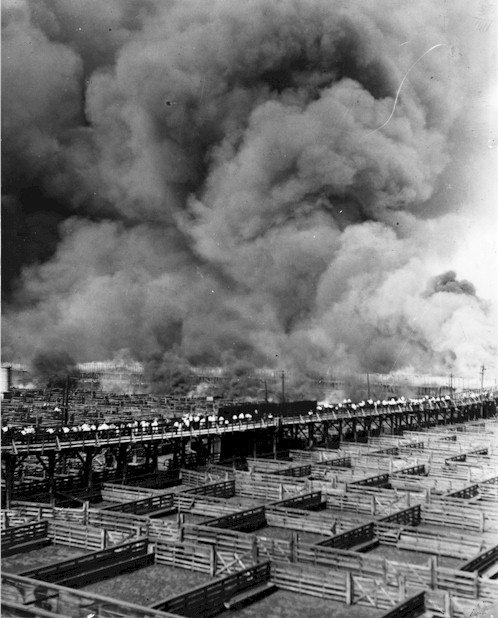 With less than four inches of rain having fallen since the first of the year, and the temperature hitting 92 degrees on May 19, 1934, Chicago was vulnerable. It took only a carelessly tossed cigarette in the Union Stock Yards that Saturday afternoon to set off the most destructive blaze since the Great Fire of 1871.

Winds proportionate to a 60-mile gale at times spread the fire faster than a man could run, and six of 100 pumpers sent to put it out it were themselves destroyed while attached to hydrants. Yet, although six square blocks of property, including parts of the steel ‘L’ structure, were left in ruins, the major packinghouses were saved.

This program reviews the strategies taken to control the fire and features photos and documents relating to the efforts of 1,600 Chicago firefighters to extinguish it. Suburban departments were also recognized. No fewer than 31 sent men and apparatus, mainly to provide protection at vacated Chicago firehouses.

Jeff Stern is a member of the Board of the Fire Museum of Greater Chicago. He has never been a Chicago firefighter, but has been involved with the Fire Department for over 75 years. Whether it was the early motorized equipment that was still in service when he was growing up or some other aspect of the fire service that attracted his interest, he’s not sure, but he managed to visit all 141 of the fire houses that were then in service before he turned 13, and was able to run with some of the busiest squads and chiefs.

Admission is free.  For further information or a Zoom link, please contact the Highland Park Historical Society: 847.432.7090 or archives@highlandparkhistory.org.