Edith: The Rogue Rockefeller McCormick (and the Highlands) 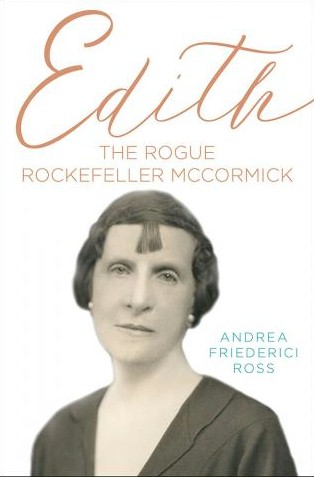 Highland Park Historical Society will host  ‘Edith: The Rogue Rockefeller McCormick (and the Highlands),’ on Thursday, September 22, 2022 at 7:00 pm live and via Zoom.

Linda Barbera-Stein is a Highlands resident and realtor who is very knowledgeable on the Highlands development by Edith Rockefeller McCormick She will provide information on what was accomplished.

This thrilling story of a daughter of America’s foremost industrialist, John D. Rockefeller, is complete with sex, money, mental illness, and opera divas—and a woman who strove for the independence to make her own choices. Rejecting the limited gender role carved out for her by her father and society, Edith Rockefeller McCormick forged her own path, despite pushback from her family and ultimate financial ruin.

Young Edith and her siblings had access to the best educators in the world, but the girls were not taught how to handle the family money; that responsibility was reserved for their younger brother. A parsimonious upbringing did little to prepare Edith for life after marriage to Harold McCormick, son of the Reaper King Cyrus McCormick. The rich young couple spent lavishly. They purchased treasures like the jewels of Catherine the Great, entertained in grand style in a Chicago mansion, and contributed to the city’s cultural uplift, founding the Chicago Grand Opera. They supported free health care for the poor, founding and supporting the John R. McCormick Memorial Institute for Infectious Diseases. Later, Edith donated land for what would become Brookfield Zoo.

Though she lived a seemingly enviable life, Edith’s disposition was ill-suited for the mores of the time. Societal and personal issues—not least of which were the deaths of two of her five children—caused Edith to experience phobias and panic attacks. Dissatisfied with rest cures, she ignored her father’s expectations, moved her family to Zurich, and embarked on a journey of education and self-examination. Edith pursued analysis with then-unknown Carl Jung. Her generosity of spirit led Edith to become Jung’s leading patron. She also supported up-and-coming musicians, artists, and writers, including James Joyce as he wrote Ulysses.

While Edith became a Jungian analyst, her husband, Harold, pursued an affair with an opera star. After returning to Chicago and divorcing Harold, Edith continued to deplete her fortune. She hoped to create something of lasting value, such as a utopian community and affordable homes for the middle class. Edith’s goals caused further difficulties in her relationship with her father and are why he and her brother cut her off from the family funds even after the 1929 stock market crash ruined her. Edith’s death from breast cancer three years later was mourned by thousands of Chicagoans.

If you are not already on our email list, need a zoom link or have any questions,
please e-mail: archives@highlandparkhistory.org