From ‘Peanut Weddings’ to ‘Beef Stands’: The Socio-Culinary History of Chicago’s ‘Italian Beef’ 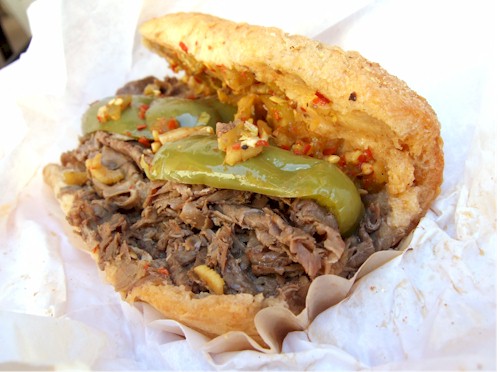 Italian Americans have contributed a considerable number of portable fast foods to regional and local cuisines around the United States, some of which have become extremely popular at the national level. One such food which, despite its frequent discussion in recent food-related media, has remained very much a local dish is Chicago’s ‘Italian beef’. As a sandwich filled with thin slices of roasted beef, this product at first blush looks to be an Italian-American take on the mainstream Anglo-American roast beef sandwich, and popular food writers have accordingly sought its origins in terms of some single ‘inventor’ whose culinary and entrepreneurial stroke of genius came to be imitated by other small entrepreneurs and thus the dish gradually became established throughout the city and ultimately its suburbs. The idea of seeking an individual responsible for the invention of a given dish is common but often misguided, and in the case of Italian beef it is especially so. My own analysis of the issue of the origins of Chicago’s ‘beef sandwich’, based in part on my knowledge of Italian and Italian-American cookery and in part on decades of interactions with older lifelong residents of the Taylor Street neighbourhood, where Italian beef first arose as a fast food, indicates, however, that today’s messy sandwich is a commercial reflection of a festive dish which itself derives directly from a traditional method of preparing meat; in essence, this dish was brought to America by immigrants from southern Italy and more specifically from Naples and its surrounding area. Of particular interest here are the socio-culinary and economic aspects of this bit of Italian-American food history.

Anthony F. Buccini studied at Columbia University (B.A.) and Cornell University (Ph.D. 1992, Germanic Linguistics); he also studied and later conducted research as a Fulbright Scholar at the Katholieke Universiteit Leuven.  He taught for many years in various capacities at the University of Chicago (Germanic Languages and Literatures, Linguistics, the College); his current research focusses on Mediterranean and Atlantic World foodways.  Buccini is a two-time winner of the Sophie Coe Prize in Food History (2005, 2018).

If you are not already on our email list or have any questions,
please e-mail: archives@highlandparkhistory.org