The Turkey, An American Story 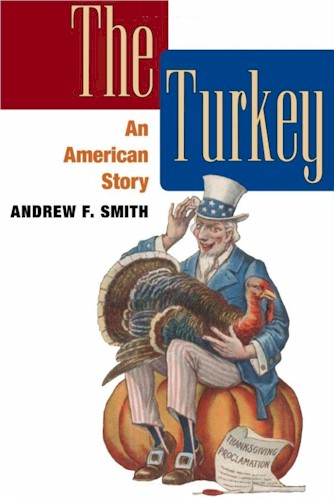 “Talking turkey” about the bird you thought you knew.
Fondly remembered as the centerpiece of family Thanksgiving reunions, the turkey is a cultural symbol as well as a multi-billion dollar industry. As a bird, dinner, commodity, and as a national icon, the turkey has become as American as the bald eagle (with which it actually competed for supremacy on national insignias).
Food historian Andrew F. Smith’s sweeping and multifaceted history of Meleagris gallopavo separates fact from fiction. Smith presents the turkey in ten courses, beginning with the bird itself (actually several different species of turkey) flying through the wild. Learn practically every aspect of the iconic bird, including the wild turkey in early America, how it came to be called “turkey,” domestication, turkey mating habits, expansion into Europe, stuffing, conditions in modern industrial turkey factories, its surprising commercial history of boom and bust, and its eventual ascension to holiday mainstay.
BIOGRAPHY: Andrew F. Smith has taught food studies courses at the New School University since 1996. He is currently teaching an undergraduate course online “Zero Food Waste.” Andrew is the editor of The Oxford Encyclopedia of Food and Drink in America, and is the author or editor of 33 books. His most recent works include the three-volume Food in America (2017), Fast Food: The Good, the Bad and the Hungry (2016), and Why Waste Food? (2020). He serves as the series editor for both the “Edible Series” and the “Food Controversies Series” at Reaktion Books in the United Kingdom.
If you are not already on our email list or have any questions,
please e-mail: archives@highlandparkhistory.org